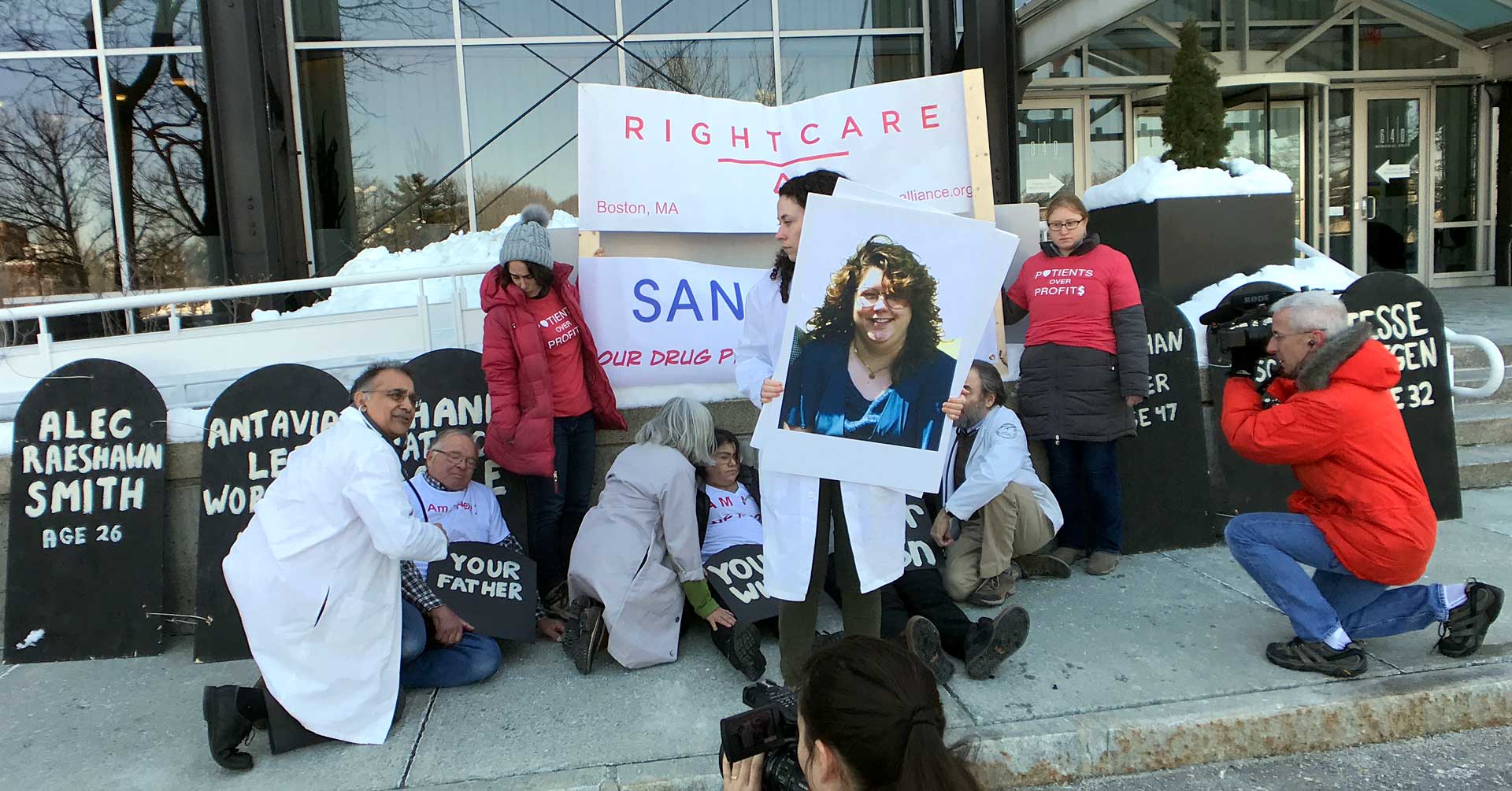 BOSTON, March 5, 2019 – The Right Care Alliance, led by its members with type 1 diabetes, delivered six gravestones and staged a protest at the Sanofi drug corporation in Cambridge, MA. Each gravestone represented an insulin-rationing victim that died recently because they could not afford the medicine that kept them alive.

Sanofi is one of three corporations that charges a 5,000 percent markup on insulin that only costs around $5 to produce.

The activists brought the four-foot tall plywood gravestones to the Sanofi entrance and secured them to metal posts with heavy gauge wire, then told the stories of Jesse Lutgen, Micah Fischer, and Meaghan Carter. The storytellers also shared their own stories of living with type 1 diabetes, ending each of their statements with the phrase: “I don’t want to be next.”

“Jesse Lutgen died from diabetic ketoacidosis at age 32, with his whole adult life ahead of him,” said Chris Noble. “I’m 29 years old and there are so many things I want to do with my life. I don’t want to be next.”

After the speeches, protesters entered the building and asked to speak with Gary Nable, Sanofi senior vice president. Security refused the request, told them to leave, and called the police. Protesters complied but left behind portraits of the three people being remembered.

This protest follows a November 2018 march on Sanofi organized by the RCA and led by two mothers delivering the ashes of children who died from insulin rationing. In the short time since that action, three more rationing deaths have come to light and Sanofi has increased their insulin prices.

“This is a fundamentally a moral issue,” said Dr. Vikas Saini, co-chair of the Right Care Alliance. “We’re here to hold Sanofi accountable for the lives lost to their greed.”

The Right Care Alliance is demanding the list price of insulin be cut by 90 percent. That would allow companies a 500 percent markup and bring the price down to the level of what is charged in other countries.

The Right Care Alliance is a grassroots coalition of clinicians, patients, and community members organizing to make health care institutions accountable to communities and put patients, not profits, at the heart of health care.