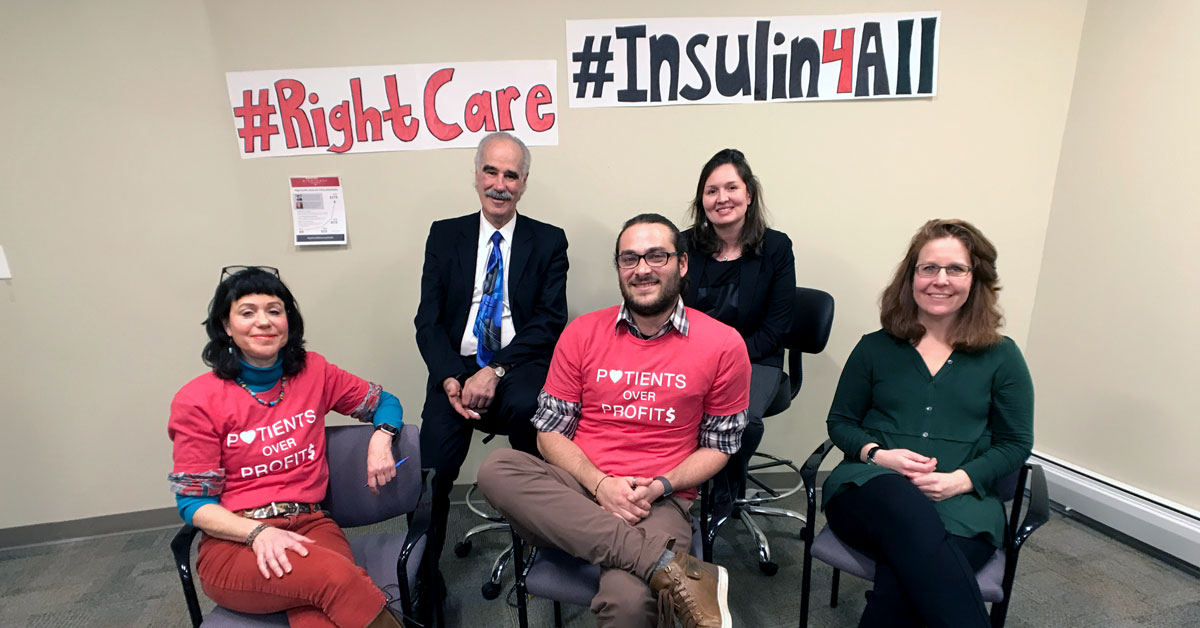 “As necessary as water”: Patients and doctors call for action on insulin prices

In the kickoff event of the Right Care Alliance national insulin price campaign, a panel of patients and doctors came together to discuss the real effects of high insulin prices on their daily lives. The panel took place at the RCA Headquarters in Brookline MA, but was also broadcast on Facebook Live (a recording of the panel is available to watch below).

A group of about 15 Right Care Boston members came to watch the panel interview in person and enjoy snacks and conversations before the event, while hundreds of people viewed the event on Facebook live from cities across the country.

It’s as essential as water

Shannon Brownlee, co-chair of the Right Care Alliance, moderated the panel. Brownlee began by introducing the RCA insulin price campaign and explaining why we are taking action on this issue.

“Drug prices are out of control. Drug companies are raising prices to ridiculous levels because they can… and it’s causing immense hardship for lots and lots of people in this country,” said Brownlee.

Noble provided an explanation of what it means to have diabetes and what a typical day is like for him. For people with Type 1 diabetes, taking care of yourself requires constant testing, monitoring, and adjusting, and insulin is a crucial part of maintaining that balance, said Noble. “It’s as essential as water for me,” he said.

Next, Simmons explained what can happen if a diabetic runs out of insulin. For patients with Type 1 diabetes, not taking insulin means “getting very very sick in just 2 or 3 days,” said Simmons, “You would quickly get dehydrated and you can fall into a coma and die.” For Type 2 diabetics, not taking insulin when needed can lead to long-term complications like kidney disease, infections, and blindness, said Simmons.

Whatever it takes to survive

Despite the dangers of not taking insulin, Waxman and Noble both had stories of people who went to extreme lengths to save up or ration insulin because they couldn’t afford to buy more. Waxman’s friend Sara can no longer afford insulin after she lost her Medicaid coverage and relies on donations of supplies from members of the diabetes online community. “It’s a bit frightening, because you don’t know what you’re getting [with supply donations],” said Waxman.

Noble himself was switching between insurance plans and was on his last insulin pen, but fortunately he has backup insulin stockpiled in his fridge. Hoarding extra insulin for times of need was a common trope. Noble told the story of a friend who worked as a counselor at a diabetes camp and would jump from camp to camp throughout the year, stockpiling insulin from the free donation programs because he didn’t have health insurance. “That was his form of health insurance, because he didn’t have money to pay for analog insulin,” said Noble, “You do whatever you need to survive.”

“You do whatever you need to survive” – Chris Noble

Not an iota of change

At this point, Nathan jumped in to comment in disbelief at how dire the situation has become. “I can’t tell you how crazy this is…there has not been an iota of change in the synthesis, the manufacturing, the patents on many kind of insulin, but they have gone up 7-fold in price in the last decade,” said Nathan.

Nathan was concerned by the stories Noble and Waxman told about patients desperate for insulin. Stockpiling insulin can be dangerous because old insulin may not be as potent as insulin that’s fresh, said Nathan. And if this is happening in Massachusetts, where almost everyone has health insurance, it is undoubtedly worse in other states.

“This is not fundamentally an expensive drug. For people with diabetes, it’s as necessary as water,” said Nathan.

No adults in the room

If insulin can be made inexpensively, why isn’t competition bringing the price of insulin down? Noble described buying insulin as getting gasoline in a remote area. ” If you have 2 gas stations next to each other and you need gas now, what’s to stop them from raising prices in tandem? There’s no reason for them to compete,” he said.

Nathan compared the US process for drug pricing with that of other countries. In countries with single-payer systems, the government negotiates drug prices with pharma companies, but in the US there is no downward pressure on prices. “There are no adults in the room to say, ‘That’s enough. You can’t charge as whatever you want,'” said Nathan.

“There are no adults in the room to say, ‘That’s enough. You can’t charge as whatever you want,'” – David Nathan

Rein sees the effects of these price increases play out with her clients, who are mostly families of children with diabetes. When parents are faced with their child’s diagnosis, it’s an emotional and stressful time, and having to navigate the incredibly complex health care system makes it worse.

Rebates and deals from drug companies are woefully inadequate for Rein’s clients. “Some companies have rebates, but you can only apply if you have no insurance,” said Rein. “Other companies give out a coupon for one vial of insulin every six months, but still you’ll be dead before you use your second coupon, so it doesn’t really work”

“You’ll be dead before you use your second coupon!” – Jen Rein

We’re at a critical point

What can we do to help lower insulin prices and get people with diabetes the care they need to survive? Simmons and Nathan said there are many things physicians can and should do. Public outcry from the physician community has worked in putting pressure on drug companies to lower prices. “We need to tell our representatives, we are subsidizing the world’s insulin,” said Nathan. On an individual level, Simmons plans to think more carefully about what kind of insulin she prescribes to patients, and possibly prescribe older formulations that are more affordable.

“We need to tell our representatives that we are subsidizing the world’s insulin” – Dr. David Nathan

Waxman pointed out that we should be able to take advantage of lower insulin prices in Canada and Mexico, and make it legal to import drugs from these countries, a policy that Bernie Sanders and others have endorsed.

Noble highlighted the role of pharmacy benefit managers (PBMs) in raising the price of insulin. PBMs are meant to negotiate lower prices for pharmacies, but because these negotiations are hidden, we don’t know how much of the savings are passed on to patients, and how much they’re keeping as profit. “There’s a lack of transparency for who’s deciding prices,” said Noble, “We need to figure out who are the players, what are the prices at different levels, and then regulate them!”

“All of these action steps need to be taken,” said Rein, “We’re at a critical point. People aren’t able to take care of their children and themselves.”

“We’re at a critical point. People aren’t able to take care of their children and themselves” – Jen Rein

We need to take all of these steps, for the sake of the millions of Americans who depend on insulin for their health. But we can’t do it alone. The Right Care Alliance is holding more events and direct actions in cities across the country, to bring doctors, patients, and community members together for change.

Our next event in the campaign is the Write-a-thon on March 10th, where RCA members will write op-eds and letters to the editor, to submit to local media. Learn more about the RCA insulin price campaign and get involved!