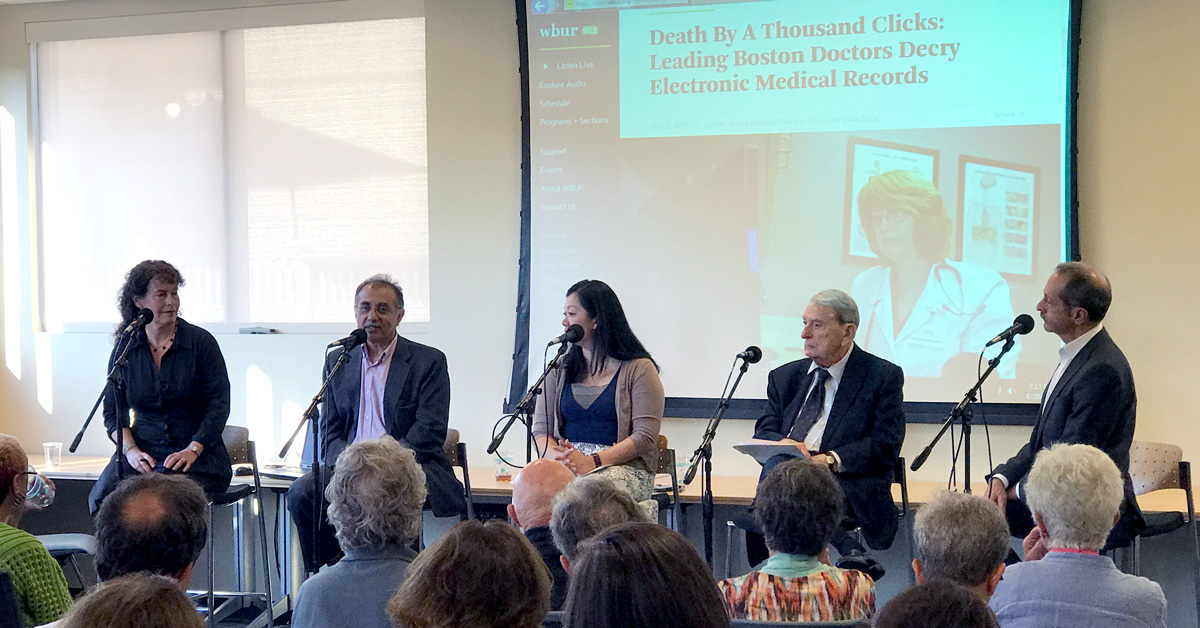 This week, nearly 100 health professionals, patients, and community members gathered at the WBUR studios to discuss the ways electronic medical records (EMRs) affect how we practice and experience medicine, and what we can do about it.

The Town Hall was hosted by WBUR’s CommonHealth editor Carey Goldberg, who introduced the discussion with popular videos to show how salient the topic of EMRs has become in the health care community.

The event began with a few words from a panel of clinicians and patients before opening up the conversation to the audience. Panelists included Dr. Galina Tan, a resident at Cambridge Health Alliance, Dr. Vikas Saini, president of the Lown Institute, patient Herb Solloway, and Dr. John Levinson, a cardiologist at Mass General Hospital.

Here are our key takeaways from the event:

Attendees pointed out the many areas in which EMRs make it difficult for clinicians to treat their patients. EMRs burden clinicians with administrative work, distract clinicians during patient visits, replicate mistakes that cause medical errors, encourage overmedication, and restrict mobility for nurses.

One doctor and biomedical researcher said she spent half of her “research day” catching up on electronic records. This time spent on administrative work could be used to find cures for patients – “Wasted time is wasted lives,” she said.

Just because I’m a millennial doesn’t mean I’m fine with staring at a screen all day.

Some have speculated that issues with EMRs are simply “technophobia” from an older generation of doctors, but we heard from both old and young attendees who felt the same about EMRs. Doctors and patients who remembered the days of house calls saw a “diminution in the human connection,” in part because of EMRs. Young doctors also said they were dissatisfied with EMRs. “Just because I’m a millennial doesn’t mean I’m fine with staring at a screen all day,” said Galina Tan.

And it’s not just doctors and patients who want change. At the event, health professionals in all areas of the health system – nurses, health care administrators, patient advocates, and medical researchers – said they wanted to work together to turn EMRs from a burden into an asset.

EMRs are a result of a highly dysfunctional system

Attendees mentioned reforms that could help hospitals and clinicians deal with EMRs on an individual level, such as switching EMR systems, lobbying for fewer EMR requirements, and taking the time to learn EMR shortcuts to save time. However, Vikas Saini and others noted that EMRs did not appear “out of the blue.” They are a result of a system that puts profits over patients.

The lack of interoperability in EMRs is not a bug, it’s a feature!

For example, an audience member suggested having an open-source code for EMRs that could be shared by users and tailored for each clinician’s needs. The problem with this idea, the panelists said, was political. “There are too many profit-seeking entities,” said Saini. “For the EMR companies, the lack of interoperability in EMRs is not a bug, it’s a feature! It’s what they lobbied for.”