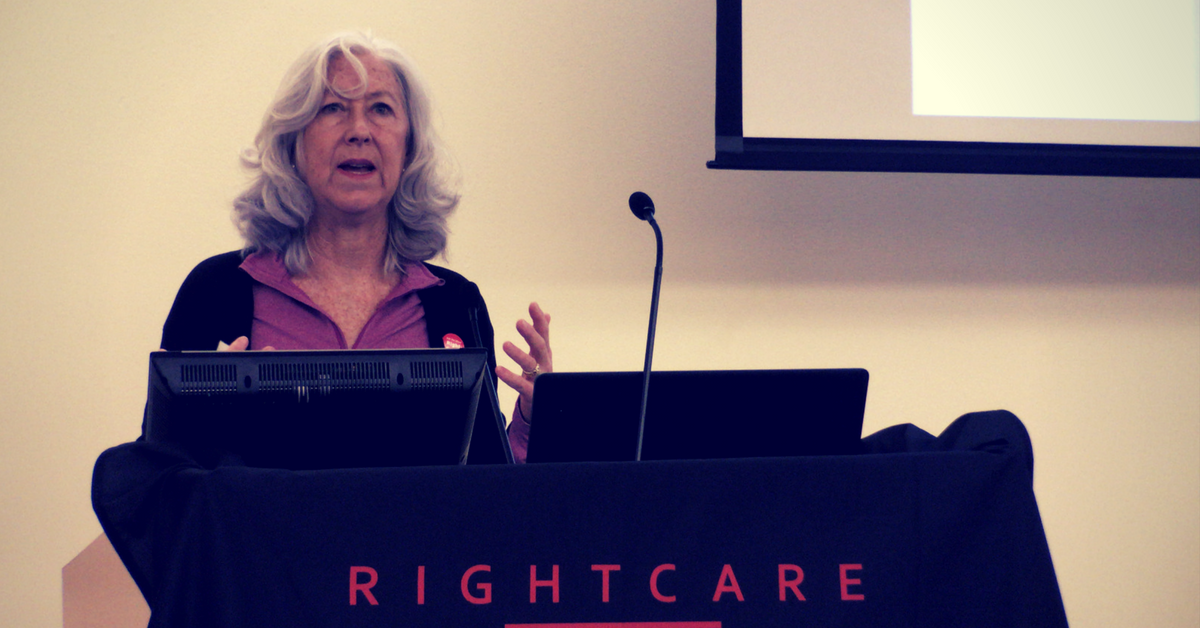 The epidemic of overuse

The day kicked off with Lown Institute Vice President Shannon Brownlee and radiologist and Yale Medical School faculty member Dr. Jill Wruble talking about the epidemic of overdiagnosis and overtreatment in the US. While medical overuse is a salient topic among health practitioners, it is less well-known among the general public how much medical care in the US is unnecessary.

“Overtreatment is the untold story of medicine,” said Brownlee, “For a long time we worried only about not getting enough care.”

When Brownlee’s father was ailing and ready to die, they continued to do tests, send him to a hospital two hours away, and give him more procedures that only increased his discomfort. “No one ever asked what he wanted or what his family wanted,” said Brownlee. She asked whether anyone in the audience had a similar experience of themselves or a family member receiving unnecessary care; almost every hand went up.

“Now that we’ve woken up to the problem of overuse, it’s time to do something about it,” said Brownlee.

Jill Wruble spoke about overdiagnosis and overtreatment caused by unnecessary cancer screening. “Cancer incidence is growing, but cancer mortality dropped 20% over the last 20 years,” said Wruble, “How can that be?” The truth is that many of the cancers we find are harmless cancers. However, the treatment that comes with a cancer diagnosis can be harmful – anxiety, distress, expense, complications from surgery and chemotherapy.

When Wruble asked the audience what they think is leading to unnecessary screening and overuse, their answers included, the lack of scientific and statistical literacy, doctors practicing defensive medicine, and our inability to accept uncertainty.

“The sanctions for missing something are so much higher than the consequences for putting someone on a train of unnecessary tests and procedures,” said Dr. Sue Ieraci.

Participants also acknowledged that many people aren’t receiving cancer screening who need it, at the same time that asymptomatic people are screened intensely. “I was dragged to the doctor at 50 years one day to get a colonoscopy, but people without insurance are on a waiting list for a colonoscopy when they’re bleeding,” said patient advocate Johanna Ryan.

Next, Dr. Rishi Rattan, Assistant Professor of Trauma Surgery at the University of Miami and member of the RCA Surgery Council, discussed the importance of addressing gun violence at a structural, rather than individual, level.

Why is it that cases of gun violence are clustered in certain families and communities? Is it passed down through cultural norms, or related to other environmental factors?

The answer, Rattan explained, is that gun violence is a symptom of structural violence – social structures that harm people by not meeting their basic needs. It is a combination of racism and inequality in our educational, justice, housing, and health systems, as well as oppressive gender norms, that lead to gun violence.

“We’ve made it nearly impossible for young men of color to achieve what a man is ‘supposed to do’ and have not given them tools to deal with that,” said Rattan.

And the way our society deals with those caught in the violence is more punitive than rehabilitative. “Our system is ‘playground justice’ – you kick me, I kick you,” said Rattan, “There’s no consideration about the long-term safety of our communities, it doesn’t reduce crime.”

Rattan highlighted ways several groups have started addressing the problem, including the Chicago Interrupters, who mediate conflict and identify youth at high risk of gun violence. However, Rattan would like to more done to prevent structural violence – the underlying cause of gun violence.

The scope of the problem is so wide, that we can help reduce structural violence at multiple levels. “No matter what your interest or focus is, there is a way to help gun violence,” said Rattan. In his own practice as a trauma surgeon, Rattan finds that he can make a big difference by interacting with patients on a human level.

“Taking the patient’s hand and saying, ‘I know you’re scared, but it’s going to be okay’ can do so much more than just rushing to take out the bullet.”

Single payer – Where do we go from here?

After a short break, Mark Dudzic, National Coordinator of the Labor Campaign for Single Payer, led a session all about single-payer health care – the current status of the campaign, the next steps, and the best strategy for expanding single-payer nationwide. (Watch the recording of the session below!)

In our current system, health care is a commodity, said Dudzic. Single payer, which would provide a single standard of care for all, would turn health care into a public good rather than a commodity.

Dudzic argued against the idea that it’s “too complicated” to change health care. From an organizing point of view, it’s not a question of complexity, it’s a question of power. “We’ve figured out how to have single payer for people over 65 with Medicare, so we know how to do it,” said Dudzic. It’s going up against the massive economic power of the medical-industrial complex that’s the hard part.

Faced with this health care goliath, we tend to “bargain against ourselves,” said Dudzic, proposing smaller policies to try and sneak our way into good health care instead of pushing for systemic change. “This may make things better for people living in that system, but it doesn’t really change the system,” he said.

The election of Trump and the popularity of Bernie Sanders have both contributed to a growing movement toward Medicare For All. A majority of Americans now support universal health care, and more and more senators are backing Senator Sanders’ legislation. There has also been progress on the state level moving toward single payer, in Massachusetts, Vermont, Minnesota, and other states.

To confront the massive corporate power of health care, we need what Dudzic refers to as “deep organizing” – one on one, kitchen table conversations. It’s not just for bringing more people into the movement, but also brainstorming the various ways in which they could fight back, and creating strategies to address the potential backlash. Fighting locally means identifying the issues that pull people together, and training community members to be leaders in the movement for that shared purpose.

“Why is primary care open 9-5, when people get sick anytime,” asked Martin.

Too many Americans are not well served in the primary care system because the system is not designed to care for the most vulnerable. We don’t have the tools to deal with complex conditions, substance abuse, or behavioral health problems.

There’s a financial incentive to make healthy people unhealthy, by declaring them as having hypertension or “prediabetes.” And yet, “primary care doctors don’t get funding to provide wraparound services,” says Martin, which are necessary to address the cases where social services and health care intersect.

Fine described neighborhood health stations as “community health centers on steroids.” They take care of not only people who walk through their doors, but everyone in the community.

The neighborhood health stations have been a success in bringing primary care, access to physical activity, urgent care access, and lowering teen pregnancy in the community. The keys to their success have been eliciting community concerns through partnerships with local government and town halls, bringing care to people where they are, and using data to track progress. For example, the neighborhood health stations offer not just membership to a fitness center, but free transportation to the center.

“We are on the front lines here in local government, and that’s where health care reform needs to happen,” said Diotta.

The last session was an informative discussion and case study on regulating drug prices led by Ali Greenberg and Chris Noble from Universities Allied for Essential Medicines (UAEM).

UAEM is an international network of students and organizers fighting to make medications accessible by putting pressure on the universities that develop them. Why universities? Because 25-33% of new drugs originate in university labs but students don’t get a say in the prices of these drugs they help fund with their tuition.

Pharma justifies their high drug prices by citing high research and development costs, but pharma spends twice as much on advertising and lobbying than they do on research.

“People say it’s a broken system of drug access, but it’s actually a perfect system if you want to make money,” said Noble.

This is where the leadership training comes in. The Right Care Alliance is poised to take on these high drug prices, starting with insulin, by organizing locally with a diverse coalition of clinicians, patients, and community members. “People power is really going to make a difference here,” said Noble.