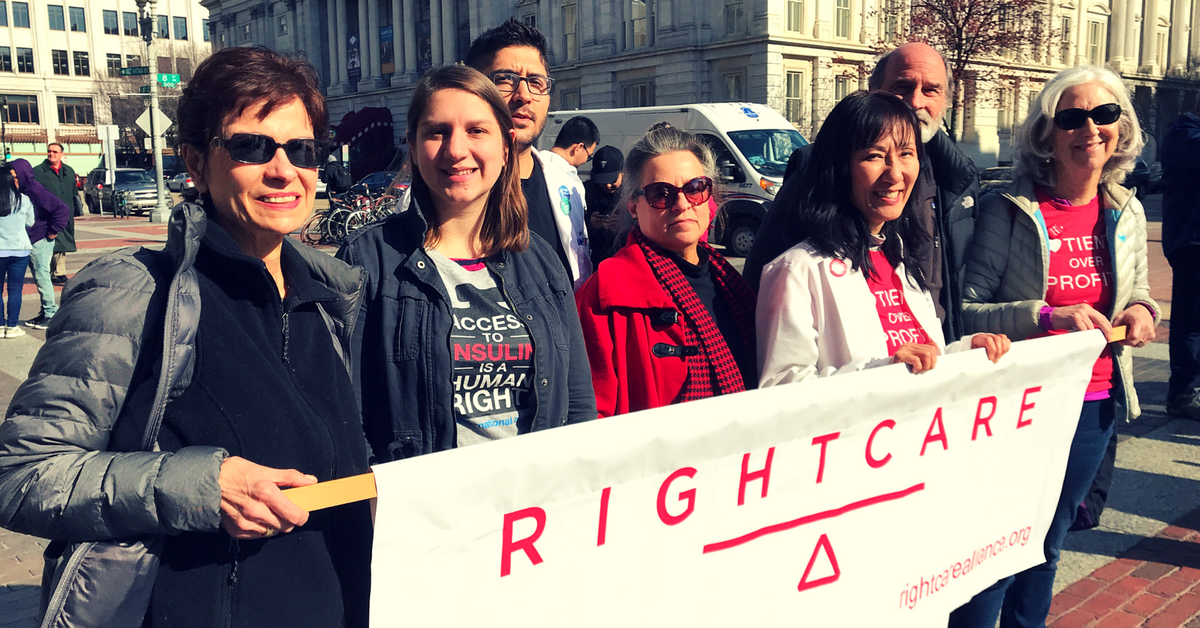 My first rally as a health care activist

I had zero experience with activism until the Women’s March in January 2017. Even then, I have to confess that I was too busy to make

my own sign, so my friends made one for me. I just showed up and experienced, for the first time, the magical feeling of connection with a large number of fellow citizens for a shared purpose.

I experienced, for the first time, the magical feeling of connection with fellow citizens for a shared purpose.

That was also the year I attended my first Lown Institute conference. As a nurse who deeply cared about patients, I already had my own experience with burnout, but I was really shocked to learn how widespread and systematic corruption is in our health care system. I felt emotional, as I started seeing the big picture and everything began to make sense. During the conference, I also learned about the Right Care Alliance, met several passionate activists, and knew I had to join them!

During the Right Care Action Week in October of 2017, the Right Care DC chapter decided to table at the Takoma Park Farmer’s Market. Again, I’d never done anything like that before but I enjoyed the casual interactions with passersby. Soon after RCAW, I learned about the upcoming chapter leader training in Boston. I asked other members if anyone was interested, but everyone told me they couldn’t attend. As a new business owner of patient advocate practice, I myself had so much to do… But for some reason, I felt strongly that one of us needed to attend the training, so if no one else is going, I must go!

That’s how I ended up taking a deeper dive into healthcare activism. The training was intense and covered a lot of organizing principles and practice. Again, most of the content was new to me and overwhelming, but I felt something was gradually activating inside of me. During one session, struggling to find an authentic “story of self,” I ended up discovering my traumatic experience as a patient (that I’d suppressed and basically forgotten!) That memory explained a lot about why I’ve always felt strongly about advocating for patients.

After the training, I was fired up with a sense of mission, some new skills, and RCA’s support system. RCA picked insulin for the first cycle of 2018 drug prices campaign, but RCDC had no member who personally used insulin. I decided to use Twitter in hopes of educating myself on current issues and meeting other activists in DC.

I was fired up with a sense of mission, some new skills, and RCA’s support system.

I soon learned about #Insulin4all and @T1International and started low-key interactions with them online. I met a DC activist, Laura Marston virtually and soon after, her friend who is also a passionate activist with #insulin4all, joined RCDC! I was so excited about meeting her, so we had a one-on-one right away, and I invited her to join RCDC calls.

RCDC is a great mix of first-time activists like me with energy and idealism (but sometimes vague ideas) and members with lots of experience. We knew we wanted to organize an event for the day before the 2018 Lown Conference, but were having difficulty deciding things quickly. At first, we thought we could protest at the PhRMA or Eli Lilly buildings, but it turned out both institutions were housed in a large buildings with no company name visible from the outside (not an ideal place for a protest).

Then one of our members suggested we could display portraits of people who were affected by insulin prices in front of the National Portrait Gallery which we walked by on the way. One member suggested we could just blow up photos of people instead of drawing, and Christine offered to solicit her daughter’s help to make the photos artistic. Our event was starting to come together!

We had less than three weeks to complete all the tasks we talked about – it seemed impossible!

Now we had great idea and location, but I still did not have foggiest idea about how to execute the event, and the scary thing was that I was supposed to be leading the effort. I was especially nervous that we would run out of time to plan everything. We had less than three weeks to complete all the tasks we talked about – it seemed impossible. Should we maybe lessen the scope of the event? Or even cancel it and focus on building the team? I reached out to the rally “emcee” and after a frank discussion, we decided we would simplify the rally. The next day I let the team know our decision and I was relieved that my teammates were very supportive.

From that point on, everything went much smoother. The RCA national team provided full support for RCDC and worked closely with #insulin4all activists. I began to feel much more optimistic, (even though I still worried about lots of things). All of us pulled our weight to create 10 great portraits, lots of signs, and get people engaged on social media before hand.

I was nervous the day of the rally, but the event went incredibly well! With the Steering Committee and RCA staff on our side, we had a sizable crowd, attracted local attention, and got 20+ people to sign up for the chapter. In the end, this turned out to be a wonderful first direct action experience for me and I learned not to worry about everything! I am very grateful to everyone who was a part of this effort and looking forward to growing as a health care activist.