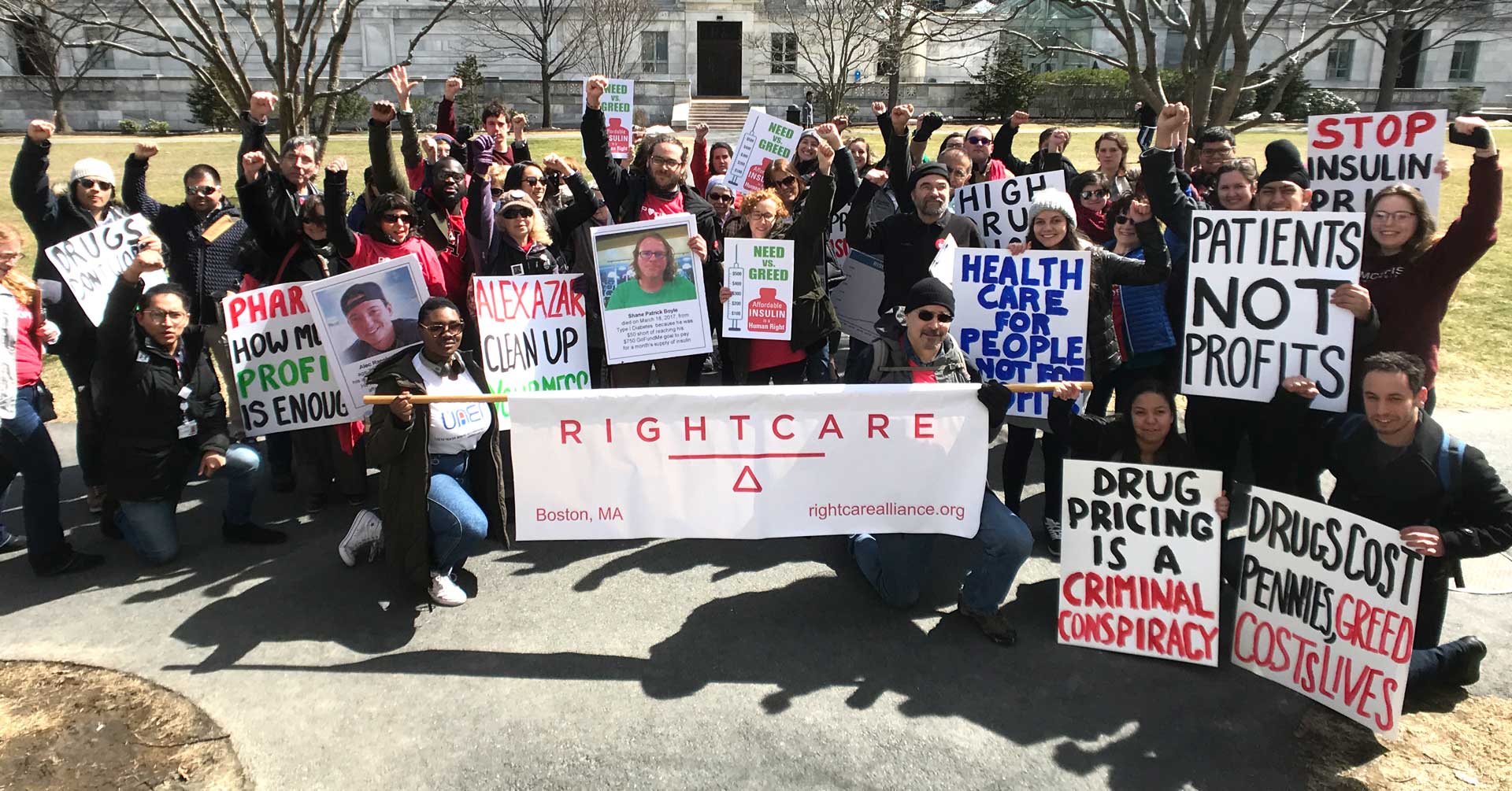 “It’s our duty to not be quiet!” RC Boston rallies against drug profiteering

On Tuesday, March 27, a group of about fifty patients, clinicians, and activists gathered in Boston, MA to march and protest the unconscionable insulin price hikes. Right Care Boston members also recruited more than 20 new people to the chapter list! This was the first of many direct actions planned by Right Care Boston in the campaign for affordable insulin.

The event started at the Joslin Diabetes Center, one of the first places in the country to provide insulin as a therapy to people with Type 1 Diabetes. Dr. Liz Halperin, a physician who works at Joslin, spoke about the difficulties treating patients with Type 1 as insulin gets more and more expensive.

“Our goal is to tailor a regimen for patients with diabetes around their children, their work. But because the price of insulin is so high, we have to tailor patient regimens based on their insurance coverage or willingness to pay,” said Halperin. Even though there have been advances in insulin products, doctors often resort to prescribing older insulin for patients because the newer insulins aren’t affordable. This can increase their risks of high blood sugar and other complications, said Halperin.

“A hundred years ago they resorted to starvation therapy to treat patients with Type 1 diabetes… which just prolonged their death,” said Right Care Boston chapter leader Chris Noble. But even though insulin was discovered in 1921, today there are many people who are dying because they can’t afford it, he said.

The group marched from the Joslin Center to the Harvard Medical Center, eliciting honks and cheers from cars and people along the way. They marched in silence, to honor the memory of those who have died from lack of access to insulin.

At the Harvard Medical School quad, Right Care Boston members took turns telling stories, of themselves and others, who struggled with insulin costs. “I feel complicit in a system that’s broken,” said physician Leigh Simmons, because she has to prescribe insulin and other medications she knows are unfairly priced. But “it’s our duty not to stay quiet!” she said.

RC Boston member Deirdre Waxman told how she resorted to importing insulin from Canada because the price is so much lower.

“Insulin is not a ‘designer drug.’ It is not optional!” – Deirdre Waxman

A few of the signs from the #RightCare #insulin4all rally in Boston pic.twitter.com/N2jNcWhgpo

Among the stories told were those of Shane Patrick Boyle, who died last year from rationing his insulin when his GoFundMe campaign was $50 short, and Alec Raeshawn Smith, who died at age 26 when he aged out of his parent’s insurance and could no longer afford insulin.

Dr. Vikas Saini, RC Boston member and Steering Committee chair, related to these stories not just as a doctor or patient, but as a father. “I can’t even imagine what it must be like to see your grown child struggling to pay for insulin,” he said.

But it’s not just insulin that’s being priced unfairly. This is just the beginning of the movement to put pressure on drug companies about prices, said Saini. “Where are the health care leaders on drug prices? We know we can’t wait for others to take action!”

“Where are the health care leaders on drug prices? We know we can’t wait for others to take action!” – Vikas Saini